With my friend Vin before the Hotel de Ville in Caen.

When I visited my old high-school friend Vin in Caen last week – my first time in that city – I became the tourist, even though I spend several months a year in France. You can always learn something about someplace.

Every March for the past few years Vin has been teaching for two or three weeks in Caen, in the Calvados region of northwestern France (it’s part of Normandy). We passed an afternoon together, and he helped me discover his personal Caen. Spending even a little bit of time in one spot makes it in some way your own. And most people want to share with others.

Still, nothing distinguishes individual personalities more than how someone shows you around. (Or how you react to what you’re shown.)

Vin is far more volubly enthusiastic than I am and he, as a professor, is used to holding forth on a topic. I’m more reserved, even if my enthusiasm is genuine, and I’m more accustomed to keeping my observations to myself. For Vin, speaking is a way of observing, or of considering what he sees while, for me, speech, as opposed to commentary, can be an afterthought to reflection, at least when I’m taking in something new.

When friends have visited me in Paris – which hasn’t happened too often (when I first started living in France, and was learning French, I discouraged visits during the months of my first stay, under the incorrect assumption that spending a little time with an Anglophone friend or relative would somehow impede my progress in French) – I generally walk around the neighborhood pointing out this and that, but I’m reluctant to fall into the attitude of a know-it-all (realizing that I actually know very little about most things).

This might be a result of my experiences with some of the people with whom I became acquainted in my first year in France. I remember, about a month after my arrival in Paris, walking around the 13th arrondissement with Jim, an expat whom I used to know, before a party to which I’d been invited. Jim expounded on everything from bus routes to local butchers, in a manner I found intriguing if a bit off-putting: he was both knowledgeable about certain points of quotidian French life and ignorant of the impression he made as a self-important pedant to a relative newcomer to the country where he had lived for a decade. 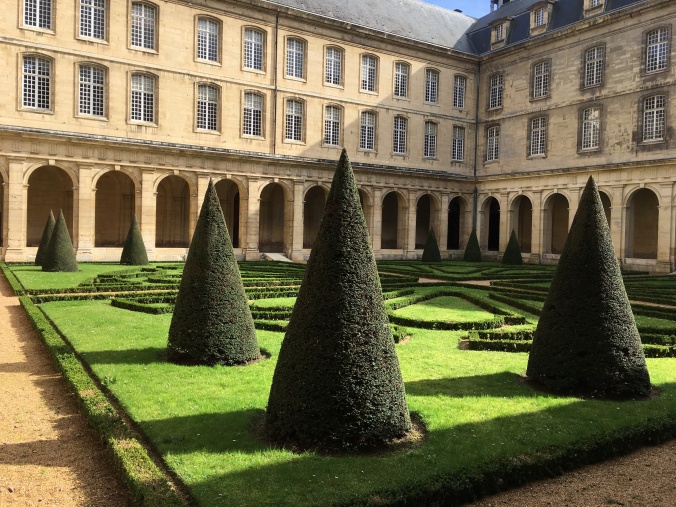 The cloister of the Men’s Abbey at Caen.

I fear slipping into a similar bordering-on-unpleasant explanatory mode when I’m describing to a visitor what I find interesting in a Parisian neighborhood, though I make a point of trying to learn for myself the history of the buildings, parks, streets and homes wherever I live, even if I’m only there for just for a few weeks.

I know that most people won’t share my enthusiasm for having uncovered trivia about a certain area I like – most people are only enthusiastic about what they discover on their own – so I tend to keep this sometimes-useless knowledge to myself, unless it involves something vaguely notorious, such as knowing the house where a celebrated 19th-century courtesan lived. To wit: Caroline “La Belle” Otero – dancer, actress, lover of kings, breaker of hearts, causer of suicides – inhabited a charming Mediterranean-style house on the Rue Fortuny, around the corner from the apartment where I stay in the 17th arrondissement. Knowing this makes the still-pretty house just slightly more significant, since what was once the residence of a self-made woman who lived large and died quite old is now home to a small financial-services firm that’s of interest only to those who make heaps of money there. Its past lends piquancy to its present. 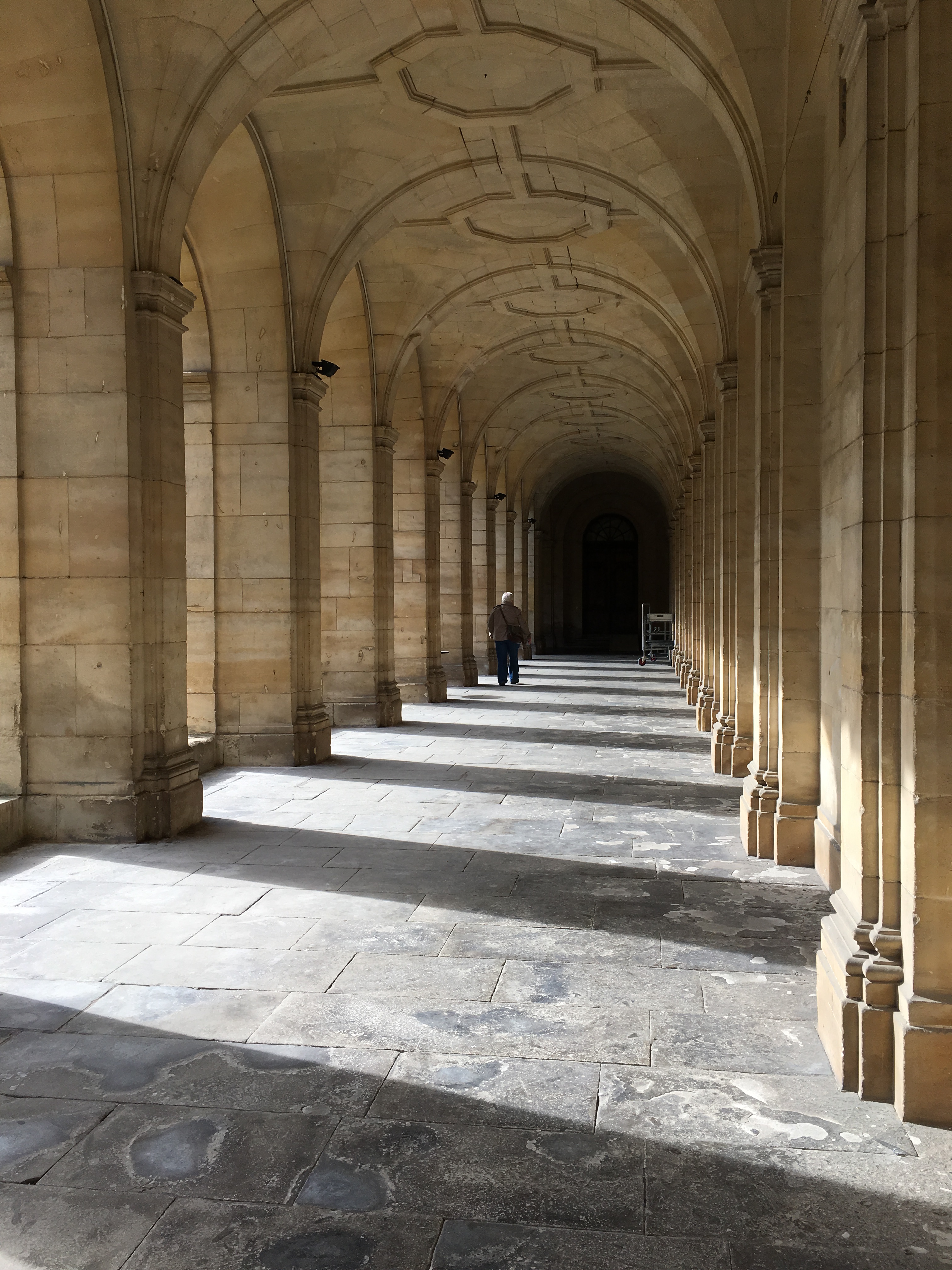 The cloister at the Men’s Abbey at Caen.

Despite my own reluctance to shower trivia upon the occasional visitor who asks my opinion of my neighborhood, when I visited Vin in Caen I was eager to hear his impressions of a city he likes, one he’s had the good fortune to return to over the course of several years. His daughter Elizabeth was also visiting him at the same time – though for a longer stay than my afternoon – and so Vin’s natural dynamic professorial enthusiasm was further heightened with a strong dose of fatherly pedagogy. He was delighted to tell both of us what he knew, in the refreshing, garrulous manner of someone who loves discovery and who takes great joy in your discovering something with him.

We met at the Église Saint-Pierre and wandered off to lunch, then hit the Hotel de Ville, with its beautiful Abbaye-aux-Hommes and its church of Saint-Étienne where William the Conqueror is buried. Vin described various historical details that I never would have found out during a self-conducted tour of my own, and provided a brief commentary on some unusual liturgical features in the stained glass and among the stations of the cross.

Afterward, we saw the chateau of Caen and took in the Musée des Beaux-Arts, which has a marvelous Perugino that would likely be passed over by swarming tourists if it were at the Louvre but that in a regional museum is given pride of place, while visitors have the chance to look at a masterwork in peace.

From the ramparts of the Chateau of Caen.

Along the way, between church and chateau, Vin provided us with some tidbits of Caen’s history, and his association with the university where he teaches. He showed me the rare medieval houses that somehow withstood wartime bombardment, and drew my notice toward the unassuming (or, more plainly, dull-looking) modernist apartment building where he had temporary quarters. I also learned, for instance, that a damaged part of the chateau (most of Caen was obliterated during World War II) was probably caused by a grudge-holding English soldier who dropped a bomb into one of the towers to avenge the Norman Conquest of 1066. That’ll show them.

This is, of course, the kind of enjoyable if apocryphal detail that a professor slips into a discourse in order to pique the lagging interest of overtired students and, of course, I fell for it. Whether it’s true or not, it doesn’t matter here: your takeaway of a place is often a result of the lore rather than the facts (see: La Belle Otero).

And the person who gives you the commentary of a place can be as important as the place itself. A difference between how my friend Vin described where we where, and how my former acquaintance Jim recounted some facts about Parisian life, was attitude. One wanted to share his knowledge, while the other wanted to impress you with his. I learned from both the professor and the pedant, but I appreciate more the professorial enthusiasm than the pedantic snobbery. Even if I don’t quite know how my enthusiasms will land the next time I recount to a friend something of interest about where I live, I’ll try to share rather than to show off.

The Examined Self: Memoir Writing
Writing from Life: Fiction and Memoir
click on photo below for more information: