The Île Saint-Louis is like a film set for Paris. Beyond iconic monuments such as the Eiffel Tower, the Île Saint-Louis’s narrow streets and well-tended buildings from centuries past are what you expect to see when you come to the city, an idea of authentic Paris made real.

The other night, my friend Bob invited me to dine at the Brasserie de l’Isle Saint-Louis with friends of his who were visiting Paris. The restaurant is in view of the cathedral of Notre-Dame just over the Seine, and located across the street from the landmark ice-cream boutique Berthillon. Everything was post-card pretty and movie-set quiet, as if an assistant director had just called “action” before the filming of a scene. You could almost ignore the family of three who sat begging on the cobblestones at the foot of the Pont-Rouge.

Bob had chosen this brasserie because he’d eaten there often when he had lived and worked in France. He wanted to introduce his friends to a place he knew personally. For most of their other meals, his friends had chosen recommended restaurants that the noted food writer Patricia Wells had included in her book, The Food Lover’s Guide to Paris.

Like a lot of visitors to Paris, they had put greater store in the printed opinion of someone they didn’t know rather than the personal suggestion of a friend who knew the city as a resident. But authenticity is how you find it, or what you make of it or what you decide it should be for you. Like facts for certain imbeciles in public life, authenticity can mean several things. But unlike alternative facts to the savagely ignorant, authenticity really can be a matter of opinion.

The Brasserie de l’Isle Saint-Louis is unpretentious, and although frequented by tourists it isn’t the sort of must-dine-at restaurant you’re likely to find listed in a guide to haute cuisine. It’s simple, the food is decent, the staff are kind, the prices are moderate. It’s the kind of restaurant I myself prefer, living here as I do several months a year. I wouldn’t call it authentic – because what would that mean in any event? But I’d call it my idea of what I like in a restaurant in Paris.

But then, I sometimes tell myself that I’m not after authenticity as much as those who visit might be. But this would be wrong: however I define what I prefer, or whether I call it authentic versus touristic or real versus fake, it’s my impression that matters in such things. Just as the impressions of my friend Bob’s visiting friends mattered to them concerning what they wanted to take away from their dining experiences here. They had decided that it was important for them to experience Paris, or Paris dining, in a particular way – and Bob’s suggestions for where they all might dine together were sometimes at odds with their wish as visitors. Ticking off a restaurant on a list authenticated something in them relating to their experience of being in Paris, and they would have been disappointed if they hadn’t been able to dine at Chez l’Ami Louis, even if when they did it turned out to be overpriced, overheated and overcrowded. But Chez l’Amis Louis had been on their list, and they had eaten there and they were satisfied, if not by the restaurant itself as by having “done” it.

Just as what you consider to be authentic cuisine results from cuisine that has been codified to reflect traditions of preparation and memories of taste, so too are experiences organized according to predetermined hopes or expectations, if that experience is contingent upon meeting what you’ve determined to be the mark of satisfaction for your trip. You might not actually get within 20 feet of the Mona Lisa, but at least you’ve “seen” it since you were in the room with a few hundred other selfie-taking tourists. You might not actually enjoy the food you were served at a highly rated restaurant that you’d read about in a celebrated guide to local cuisine, but at least you could say that you’d been there. Your memory of visiting trumps your experience of actually studying the painting or eating the food.

Like my friend Bob does with his friends, I recommend places that I want to share with others. But I have to let go of my own expectations of what they themselves decide about the restaurants or sights I urge upon them. I want to share what I love, but I cannot convince anyone to share in my own enthusiasms.

As an American in Paris, I have seen how France protects its patrimony and its traditions, and how it seeks to determine what is or isn’t French. But that determination of authenticity regarding culture, cuisine or even nationality is, after all, artificial. Nothing is authentic, in the end, because everything results from someone’s opinion of what authenticity should be. That isn’t to say that reality isn’t real (though that too can depend on your perspective), or that we shouldn’t resist the current pernicious public tendency to downplay truth in favor of propaganda. But the enjoyment of the current moment – regardless of how difficult it can be to enjoy anything during a time when sensible people live in anguish over the state of the world – is as authentic as whatever the guardians of cultural propriety determine it should be.

The other day, I happened to be at the home of a friend in Montmartre, and in looking out his window at just the right moment I caught sight of a shimmering rainbow that arced from Saint-Denis, just outside of Paris, to the other side of the church of Sacré-Cœur, near my friend’s apartment. Rainbows, like experiences, are fleeting. I can share the photo, but not the event, but that’s usually the best any of us can do.

This isn’t the same, of course, as telling people that they simply must dine at such-and-such famous restaurant in order to fully appreciate what it is to visit Paris, but then, even if you’re disappointed in what you find when you’re actually there, your experience itself will be authentic. That rainbow was ephemeral, but my observing it was real. It was an authentic moment for me, but it will always be a slightly distant one for anyone who wasn’t there to see it. I still wanted to share it, however, which is the point. My Paris isn’t yours, but our experiences are still valid, however we authenticate them to ourselves. 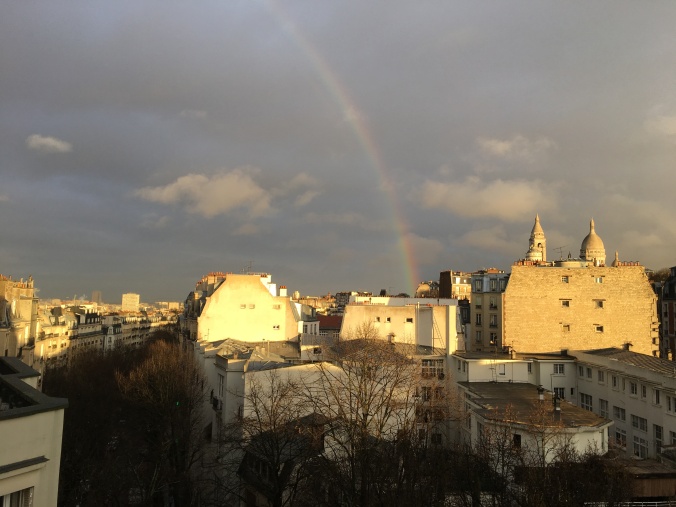 The Examined Self: Memoir Writing
Writing from Life: Fiction and Memoir
click on photo below for more information: